Aboriginal and Torres Strait Islander people are advised that this page may contain the images, names and words of people who are now deceased. 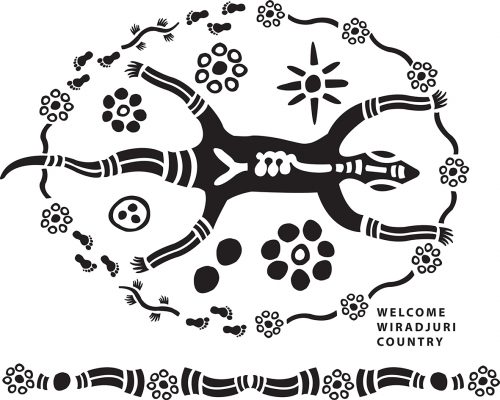 Mali Marambir Ngurang: to make better place Lachlan was a project of the Lachlan Health Service Culture and Arts Program, coordinated by Arts OutWest at Parkes and Forbes hospitals.

The project involves key directional signage around the hospitals written in English beside the Wiradjuri interpretation, which is then translated back into English. The project aimed to make the hospital spaces more inviting, less daunting for Aboriginal people.

More than 20 key places in the hospitals have bilingual interpretation. For example: Ngaagigu Mulunma, (to see inside) is used alongside signage for ‘medical imaging’; Ngurang Mindyali (to be fixed fast) are the words for ‘operating theatre’. Waluwin Ngaan (‘healthy mouth’) points the way to ‘oral health’; and Wambuwanbunmaldhaany (medicine maker) points to the pharmacist.

An Aboriginal Signage Strategy (2016-2019) has now been adopted by Western NSW Local Health District and the signage will be rolled out at hospitals right across that health region, in local Aboriginal languages . This vision was launched at Parkes Hospital on March 17, 2017.

An number of local Wiradjuri Elders worked closely with Dr Stan Grant, co-author of the Wiradjuri dictionary, to ensure the words were correct and close to their English meaning.

LISTEN: David Acheson, Wiradjuri man and member of the Lachlan Health Service Culture and Arts working party speaks the words from the bilingual signage now in place at Parkes and Forbes hospitals. Listen below.

Media: Read the story about this project in the Forbes Advocate

The project, to integrate Wiradjuri language signage and translations into the new Forbes and Parkes Hospitals, won one of the Western NSW Local Health District’s top awards in 2016.

Lachlan Health Service’s Mali Marambir Ngurang: to make better place Lachlan has won the Chief Executive’s Award at the Western NSW Local Health District’s annual Living Well Together Health and Innovation Awards. More than 50 projects were received for the Awards, which is a record number of entries.

The Lachlan Health Service project team accepted the Chief Executive’s award during a gala dinner in Orange on 31 May 2016. The project also received a Highly Commended in the category Closing the Gap in Aboriginal Health Disadvantage.

The meaning of the gugaa goanna symbol on the entry doors as explained by ngangaanha, Robert Clegg, designer and Wiradjuri Elder:

When a person enters, the doors open and the gugaa divides. This shows that there may be an illness and healing may be needed.

When the doors close behind the person, the gugaa comes back together, and shows that the healing process has begun.

The gugaa is surrounded by a healing ring.

The tracks and footprints around the gugaa show the way to where the healing process will take place.

The circle symbols in front of the gugaa are the specialist areas of the hospital which assist with the healing.

The symbols inside the healing ring around the gugaa are the clan groups, community groups, families and carers coming together to bring good thoughts to those being healed, or to be healed themselves. The star is vital, giving refreshing life and energy to the healing process.”

Local Aboriginal Elder and artist, Robert Clegg designed a Wiradjuri “gugaa” for the front entrance of the new Parkes Hospital.

The NSW Government provided $113.7 million to redevelop the Forbes Hospital and build a new Parkes Hospital. A component of this funding was used to help deliver the Lachlan Health Service Culture and Arts program.

The Culture and Arts Working Group includes representation from the Lachlan Health Service Project team, Arts OutWest, the Lachlan Health Council, health staff and the Aboriginal community and is responsible for implementing a flexible and sustainable program that promotes well-being and creates a welcoming, vibrant place for the Forbes and Parkes communities.

An award winning Wiradjuri language signage program that began as part of our work at Parkes and Forbes hospitals has since been rolled out to other hospitals in inland NSW, in local Aboriginal languages.

Location: Parkes and Forbes, then hospitals across the Western NSW Local Health District