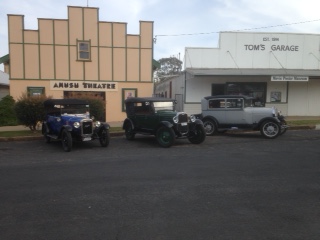 “Students were excited and enthused by the realisation that interesting, dramatic and significant events occurred where they live,” Paul Stafford said.

The short films by each school cover local stories:

During five-day long workshops delivered by Paul Stafford at each participating school, students were taught skills in research, interviewing and writing. Students learnt techniques in using source materials, combining these with their own research – including talking to seniors – to create a set of  compelling historical scripts. The stories were filmed on the final day of the workshop.

Students were asked to engage at least one senior citizen in their personal research of the event (grandparent, neighbour, family friend) and ask that person about their memories of that or other incidents in the district.

“In this way senior citizens were drawn into the information loop – they enjoyed being questioned about their experiences, and students were reminded how important a role seniors play as repositories of cultural memory and information,” Mr Stafford said. “The seniors in the project essentially became both the source material themselves and the script consultants.”

The scripts were performed by drama students. Students also worked with local composer and musician Miles Wright to create an original score for the project, with each school contributing their own interpretation of the score. Vince Lovecchio (Canobolas Rural Technology High School) stepped in to assist with the editing, alongside David Antioch (previously a student of Molong Central School, now studying at the University of Wollongong).

Parents were invited to have input into the project, via their own information and/or assisting with period costume. Students were encouraged to share what they had learnt with their parents, with a view to increasing community awareness of local events of historical significance.

“Students don’t have a large connection with the region’s history. History Here aimed to change that lack of awareness through connecting youth with seniors and highlighting the value of using historical events as the foundation for creative output,” Mr Stafford said.

Feedback from teachers and parents included:

VIDEO: Five fantastic short films about the Orange and Cabonne region’s history were made by primary school students collaborating with local seniors.

These first screened at the Amusu Theatre in Manildra on Saturday 10 June, 2017 as part of the Orange Youth Arts Festival in 2017.

Borenore Public School – The story of Frank Rusconi, discoverer of marble at Borenore.

Spring Hill Public School did an interpretation of the Man from Ironbark (with a local connection).

Cudal Public School – The story of Max Hazleton, founder of Hazleton Airlines who survived a crash in the bush in the Cox River Catchment, sustaining no injuries (apart from a broken watch) and wandered starving for six days through wild canyons.

“Students were excited and enthused by the realisation that interesting, dramatic and significant events occurred where they live,” Paul Stafford said.

This project was auspiced by Arts OutWest