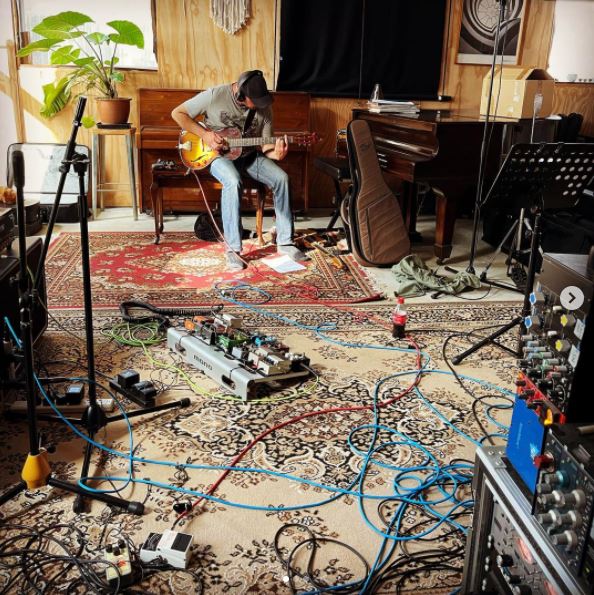 Original music. Reflections on 2020 from the NSW Central West.

15 artists and groups from across the NSW Central West come together in a new compilation album. This Arts OutWest project was one of our responses to Covid-19 impacts on the local music industry during 2020.

Kris Schubert was commissioned to record and produce the songs with the artists at The Boat Shed studio in O’Connell.

This collection of songs is a cathartic expression about 2020, but it is also a musical journey across the Central West. We envisage the album as an audio culture map to experience our local musicians.

The album was funded by the NSW Government’s Arts Restart package. Proceeds from CD sales go back into supporting local musicians and live music events in the NSW Central West.

CD copies of the album are available below for $10 + postage (orders are mailed out on Fridays).

You can also purchase the album in person from these local venues (more to come):

GET A TASTE OF THE ALBUM

Digital versions of each track are also available from many of the artists’ preferred platform or site (we’ll add the links below as they become available) . We’ve done it this ways because it is important to Arts OutWest that the ownership and any digital sales of the tracks remains with the artists themselves. Part of the project has included professional development for the artists around making sure they’re set up to receive APRA/ AMCOSS royalties.

The album “While the World Waits”:

1. Ninakupenda – Lueth Ajak (Bathurst)
Lueth is an in-demand live performer creating a party atmosphere with just his voice, a guitar and a loop pedal. He has released singles in 2020 and 2021.
“Ninakupenda, is a song I wrote about saying “I love you” and sometimes the person you love should hear it in every language you know.”
Lueth Ajak – guitar and viola
Boatshed Choir – backing vocals
Lueth Ajak Music
➡ LISTEN to and BUY the ‘Ninakupenda’: on Spotify or Apple Music

2. Atomic War – Josh Maynard (Cowra)
Atomic War is a glimpse of what It’s like to be the musician that is Josh Maynard.
“Atomic War is a concoction of different experiences and feelings. A mere window to my brain for people to peep through. This song was built from complete surrender as I try continue to navigate my purpose.”
Josh Maynard – guitar and vocals
Phil Burke – drums
Blake Toomey – bass
Kris Schubert – piano Follow
Josh on Facebook
WATCH: the film clip for ‘Atomic War’ (Youtube)
LISTEN to and BUY: ‘Atomic War’: coming soon

3. Tomorrow – Lynda Manwaring (Orange)
Lynda is currently gearing up to record the follow-up to her 2016 album The Springbird.
“Like everyone else at the time, I was sitting around in a coffee stained t-shirt and baggy sweat pants, locked down and noodling mindlessly on my guitar. I came upon a little repetitive pattern and found myself singing the word ‘tomorrow’.”
Lynda Manwaring – vocals
Kris Schubert – guitar
➡ LISTEN to and BUY ‘Tomorrow’: www.lyndamanwaringmusic.com

4. Killin’ Time – Gavin Bowles (Hampton)
A song about the day to day practicalities of having life put on hold. Gavin’s new album This Year’s Modem was released in 2020.
“Killing Time’ was written during 2020’s initial lockdown period. The song reflects on the themes of getting older, lacking motivation and finding one’s purpose, possibly with a glass of wine hand.”
www.gavinbowlesmusic.com
Gavin Bowles – guitar, bass and vocals
Kris Schubert – arrangement for strings
➡ LISTEN to and BUY ‘Killin’ Time’

5. What Am I To Do – Gabbi Bolt (Bathurst)
Gabbi had an amazing 2020, becoming a runaway success on TikTok.
Gabbi Bolt – piano and vocals
Kris Schubert – arrangement for strings
www.gabbibolt.com
➡ LISTEN to and BUY ‘What am I to Do’: on Spotify
➡ on Apple Music
➡ on Bandcamp

6. Trouble We’re In – Genni Kane (Millthorpe)
An ARIA award winner, Genni’s second solo album Songs From the Kitchen Table was released in 2019.
“When producer Kris Schubert approached me to be a part of this AOW project, I immediately penned Trouble We’re In. This song is quite dark for me as I generally look for hope in even the most difficult of situations. 2020 just floored me.”
Genni Kane – vocals
Kris Schubert – piano
Amy Viola – viola
www.gennikane.com.au
Follow Genni on Facebook
LISTEN: ‘The Trouble We’re In’ (on Youtube)
➡ LISTEN to and BUY ‘The Trouble We’re In’: on Bandcamp
➡ on Spotify

7. Better Deal – BC and the Foot Falcons (Grenfell)
Grew out of a regular jam between long-time friends.
“Better Deal refers to the human default of thinking the grass is always greener on the other side.”
Brent Cartwright – vocals, rhythm guitar
Luke Armstrong – lead guitar
Michael Yates – organ
Heath McKinnon – drums
Shane McCahon – bass
Written by Brent Cartwright
➡ LISTEN to and BUY ‘Better Deal’: https://ditto.fm/better-deal  or listen on Spotify

10. Stay Together – Adam Enslow (Forbes)
Adam is a singer/songwriter and producer who has been working on his craft for more than 25 years.
“Stay Together is about how strong we are as a people if we all ‘stay together’ and not be divided by hierarchical interests wishing to separate us to fulfill their agenda.”
Adam Enslow – vocals, guitar and bass
Kris Schubert – wurlitzer electric piano and backing vocals
James Vanderhel – drums and tambourine
www.startfastproductions.com
➡ LISTEN to ‘Stay Together’: On Spotify

11. It’s Time – Amy Viola (Orange)
Amy is a classically trained violist, who works with a loop pedal to layer up rich textures.
“It’s Time is the only song I wrote in 2020. It’s making a point that we can so easily lose sight of the bigger picture. Off the back of a biological pandemic, fear became far more prevalent than the virus in 2020, and although this moment will take its place in history, we need to remember to remember – that Covid is just one of many pandemics we are suffering from in the world, and it’s time to take responsibility.”
Amy Viola – vocals, guitar and viola
Kris Schubert – piano
www.amyviola.com
Instagram
Facebook
Youtube
LISTEN to and BUY ‘It’s Time’: coming soon

12. Virtual Folk Club – Nerida Cuddy (Canowindra)
Nerida found a new audience during isolation by performing online to a UK based folk club. Her new album Woven was released in 2021.
“While I deeply appreciate that the pandemic has brought great tragedy to many people in the world, and difficult times for many in the music industry in Australia; 2020 has actually been an exciting year of growth for me as a musician. I wrote Virtual Folk Club for my friends in the weekly Bristol-based zoom folk club that I was lucky enough to be invited to join in April 2020.”
Nerida Cuddy – vocals, guitar and piano
www.nerida.info
Watch the film clip (live version) of ‘Virtual Folk Club’ on Youtube
➡ LISTEN to ‘Virtual Folk Club’: on Spotify or buy the single on Bandcamp

13. Wait – Gracey Denham-Jones (Parkes)
A song about the complexities and emotions of turning 18 during isolation.
“Wait is a country song that I wrote with a main focus on the concept of resilience. This song aims to provide hope to those experiencing hardship particularly those affected by covid. It is about moving forward together and creating the thought that although we are experiencing the toughest of times in this day and age, our lives could always be worse. We are called in this world to ‘wait’ for the better days; hold on and be strong when times get tough, as there is always a rainbow after every storm.”
Gracey Denham-Jones – vocals and guitar
https://graceydenham-jones.hearnow.com/
➡ LISTEN to and BUY ‘Wait’: on Spotify or Apple Music

This project was proudly supported by the NSW Government’s Arts Restart funding.

LARGE IMAGE: BC and the Foot Falcons (from Grenfell) record with Kris Schubert at The Boat Shed Studio, O’Connell. Album cover image: Steven Cavanagh ‘3:11 – 3:16am Wednesday 6 May 2020’ (still from video projection (c) 2020.

‘While the World Waits’ CD albums NOW FOR SALE. Scroll down this page to purchase.

Recoreded by: Kris Schubert at the Boatshed O’Connell (execpt track 4, produced by Gavin Bowles). Mastered by Rick O’Neill at Turtlerock.

All songs written by the artists unless other wise noted. All rights reserved (c) 2021.