Home Arts OutWest news Arts OutWest supports: Mitch Grainger in Canowindra
4   
Arts OutWest news Music Industry Support 11 April 2021,
Friday April 23. “Close your eyes, and you can feel the heat and smell the dust of Mississippi”… Here’s your chance to get a dose of the Delta Blues by the banks of the Belubula.
Arts Outwest in conjunction with Canowindra Music & Events Co presents Mitch Grainger for one night only with a a special ‘Taste Of The Blues’ dinner performance. Tickets for show only or two course blues inspired meal at Moorbel Hall. Bar will be on site during the evening.
Friday 23 April, 6pm
Moorbel Hall, Canowindra
GET TICKETS

Since stepping into the light with his 2015 breakout solo acoustic release ‘The Blues’, Mitch Grainger and his high-energy stage show have burst onto the blues & roots scene, like a field holler echoing from the deep dark south through a dusty 50’s tube amplifier. He’s packed houses in the US, Australia and Scandinavia, performed at prestigious festivals, such as the American Folk Alliance in Kansas City, and earned standing ovations while opening for Tommy Emmanuel across the North East of the USA.

His sound, built on a talented configuration of vocals, harmonica and guitar, has come of age**.

It’s been likened to a fine single malt whiskey by Steve Creedy of the Australian Newspaper, and the comparison is apt, as Mitch Grainger has quietly been maturing as an artist for over 25 years, while performing and recording along side some of Australia and the world’s greatest artists, such as Malcolm Young (AC/DC) and Harry Vanda to name but two.

Now with a growing global fan base that includes over 100,000 subscribers on YouTube, Mitch Grainger is in the studio recording an album with the working title of ‘Plug It In’ that promises to take his raw emotional form of Blues & Roots music up the metaphorical Mississippi river, out of the acoustic domain, and into the voltaic.

This performance is proudly funded by the NSW Government’s Arts Restart, as part of Arts OutWest Music Industry Support Strategy. 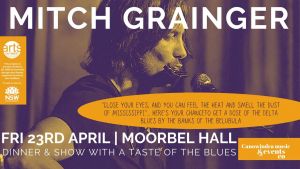